I asked AHA about time once, I’d had an odd experience previously and I wanted to see if what he offered could help me relate to it more consciously. I lost most of what he expressed, but I retained enough to come to the following imperfect understanding.

Time is essentially the linear progression of one thought after another. We are apparently incapable of thinking two thoughts in one moment, so we relate to the progression of thoughts by calling it time.

That’s why time can appear to slow and speed up, it depends upon the occupation of our mind. Time is a label we’ve created to help us understand the relation of our thoughts to this moment in our physical existence.

What AHA expressed did help me understand my odd experience though. Early in my journey, I was doing some inner exploration, and I was able to follow some of my unconscious reactions back to their traumatic source. What was odd is that the traumatic source was actually from a past life. Its tricky to recall a past life in this way because only the traumatic moments really make an impression deep enough in the mind that I’m able to partially read them. The other moments are gone, blanks in my memory and our minds like to fill in blanks like that with plausible stories. Unfortunately, the stories can be really distracting when you are trying to read what’s actually there.

Anyways, while I was processing this trauma, as best as I was able, I had a moment where I de-identified from some bitterness and rage that I’d been carrying through multiple lifetimes due to the trauma. The bitterness and rage were what I was trying to express with those unconscious reactions that I’d followed back. 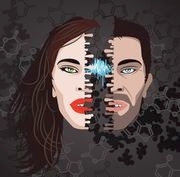 The REALLY unusual part is that somehow I was simultaneously relating to both my present lifetime and a moment in that past life when that de-identification occurred and I cleared the bitterness and rage in both of those moments with the same choice and thought. Before the de-identfication, I had the impression that I’d spent my entire past life alone, traumatized and died a bitter, unhappy, old man. After the de-identification, I had the distinct impression that I’d been able to forgive myself earlier in my life, that the bitterness and rage had been dispelled and that the course of my previous life had been significantly altered in this moment of simultaneous de-identification, and that somehow, there was no paradox in it all.

What AHA said about time, and this experience, helped me realize that while we cannot have 2 thoughts in one moment, we are capable of having 1 thought in two moments simultaneously, (the de-identification). I suspect that’s because our thoughts aren’t very physical, and as such, they aren’t as limited by time and space as our bodies are.

I’ve never been able to duplicate the feat, although I have cleared past and present life traumas since, and have tremendous emotional freedom as a result, but I’ve never again been able to have one thought in two moments, much to my annoyance. 🙂

Of course it is happening inside your head, but why on earth should that mean that it is not real?~J.K. Rowling, Harry Potter and the Deathly Hallows